Elevator Renovations - February 3, 2023 - May 1, 2023
The Hotel Roanoke will be removing one of our three Lobby elevators from service to perform a beautiful renovation. All guestrooms can be accessed by utilizing the two remaining elevators except for the Governor’s Suite which will require exiting on the 6th floor and taking the staircase to floor 7.
If you need a more accessible version of this website, click this button on the right.Switch to Accessible Site 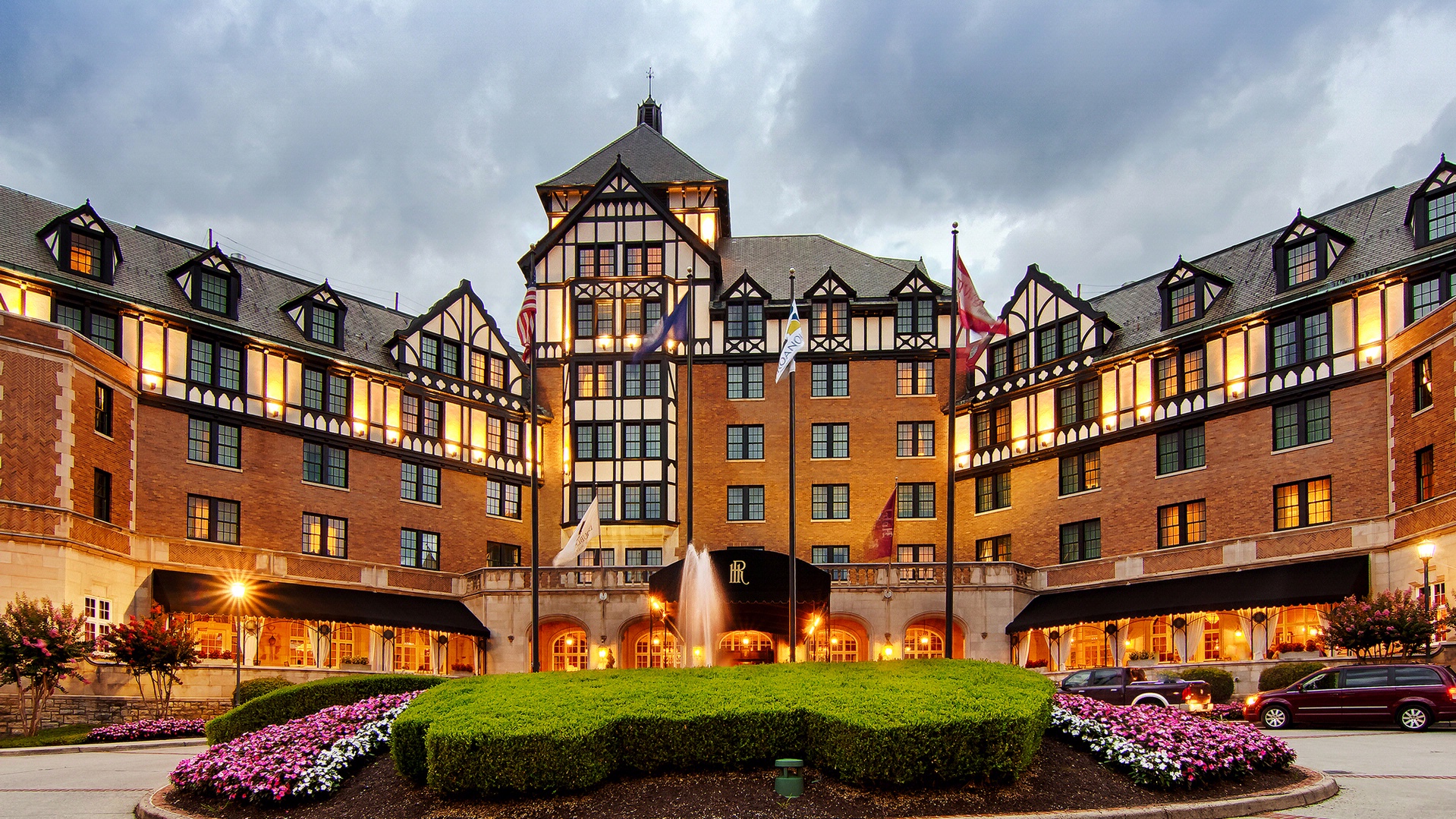 A Heritage of Hospitality 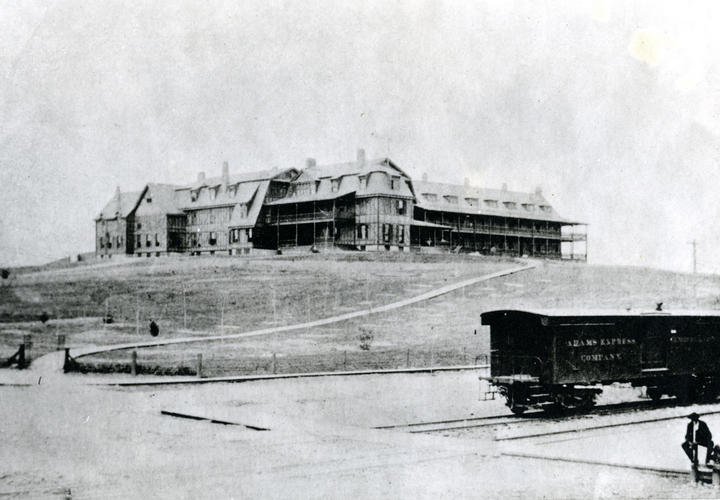 The Hotel Roanoke & Conference Center today features 329 luxuriously appointed guestrooms and a 63,000- square-foot, high-tech conference center. It is a joint project of Hotel Roanoke LLC, the City of Roanoke and Virginia Tech. In the beginning, Roanoke was a little town named Big Lick when enterprising railroad magnate Frederick J. Kimball chose it as the site of a railroad juncture and a major city. After Kimball combined two of his railroads into the Norfolk and Western Railroad, he built his vision of a comprehensive community with the Hotel Roanoke as its grand centerpiece. Travelers coming to the city or breaking a tiring rail journey made the Hotel Roanoke their haven.

Built in a wheat field on a little hill, the Hotel Roanoke began as a rambling wooden structure of less than three dozen rooms. As the city grew, the railroad consistently provided resources for hotel additions, remodeling and furnishings to maintain the Hotel's reputation for excellence. Even in the Depression year of 1931, the railroad spent $225,000 for a wing with 75 rooms, a 60-car garage and such "modern" amenities as circulating ice water, movable telephones and electric fans. By then the Hotel's "Queen Anne" appearance had evolved into something Tudorean, the finishing touches of which were added in the major alterations of 1937-38, when Hotel Roanoke acquired its distinctive facade and entrance. Added too were new public rooms, most of which today's guests will recognize. The history of the Hotel has been carefully preserved over the years.

In 1989, Norfolk Southern Corporation, direct descendant of Kimball's Norfolk and Western Railroad, concluding that its transportation business meant rail service, not room service, closed the Hotel it had owned and operated for 107 years and gave it to the Virginia Tech Real Estate Foundation. After being closed for four years, in 1993 the Hotel Roanoke began a multi-million dollar restoration and remodeling renovation project, funded by a package of public and private financing in conjunction with the City of Roanoke and Virginia Tech. 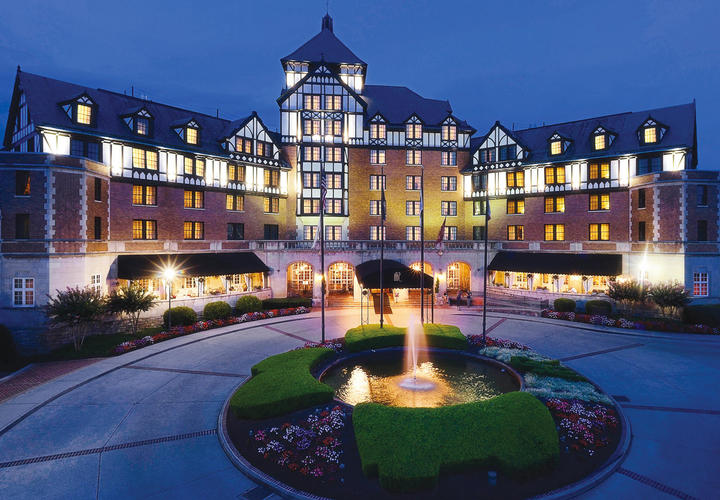 Re-opening in April of 1995, Hotel Roanoke carefully preserved the past with touches such as an antique-filled lobby, original Czech-made chandeliers, a restored Regency Room (home of our signature Peanut Soup), Pine Room (formerly an Officers' Club in World War II), and the Palm Court, the original ceiling of which was painted to show the constellations as they appeared in the skies the day the first train came to Roanoke in 1852. Simultaneously, the Hotel Roanoke embraced the future by building a 63,000 square-foot meeting space, featuring state-of-the-art technology and accommodating more than 1,200 people, evolving into the Hotel Roanoke & Conference Center.

Today, the old Hotel Roanoke is the new Hotel Roanoke, restored and remodeled through a multi- million dollar package of public and private financing, including as a palpable gesture of affection for “their” hotel, $7 million in donations and loans from local individuals and companies.

With a new high-tech Conference Center and other contemporary services and amenities, the hotel still retains the gracious flavor of the old Hotel, ready to greet and captivate guests just as it did for more than a century. As the Hotel Roanoke & Conference Center moves towards the future we will continue our commitment to excellence and providing a wealth of entertainment, dining, and hospitality options. 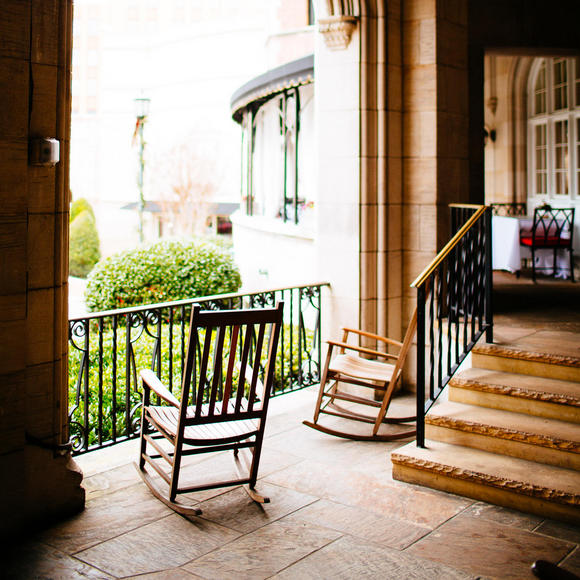 In addition to railroad travelers and businessmen, out-of-towners in the 19th century came to Hotel Roanoke to enjoy long vacations in mountain air. The Hotel's deep veranda, concealed from summer sun by fragrant wisteria, invited relaxation. Since the time of the Hotel's original guests have come Presidents of the United States, governors, millionaires, theater and sports stars, attendees for political and business conventions, and Miss Virginia competitors since 1953. Not as celebrated as these notables, but perhaps more important - since they have always formed the core of the Hotel's business - are countless thousands of Roanokers.